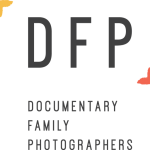 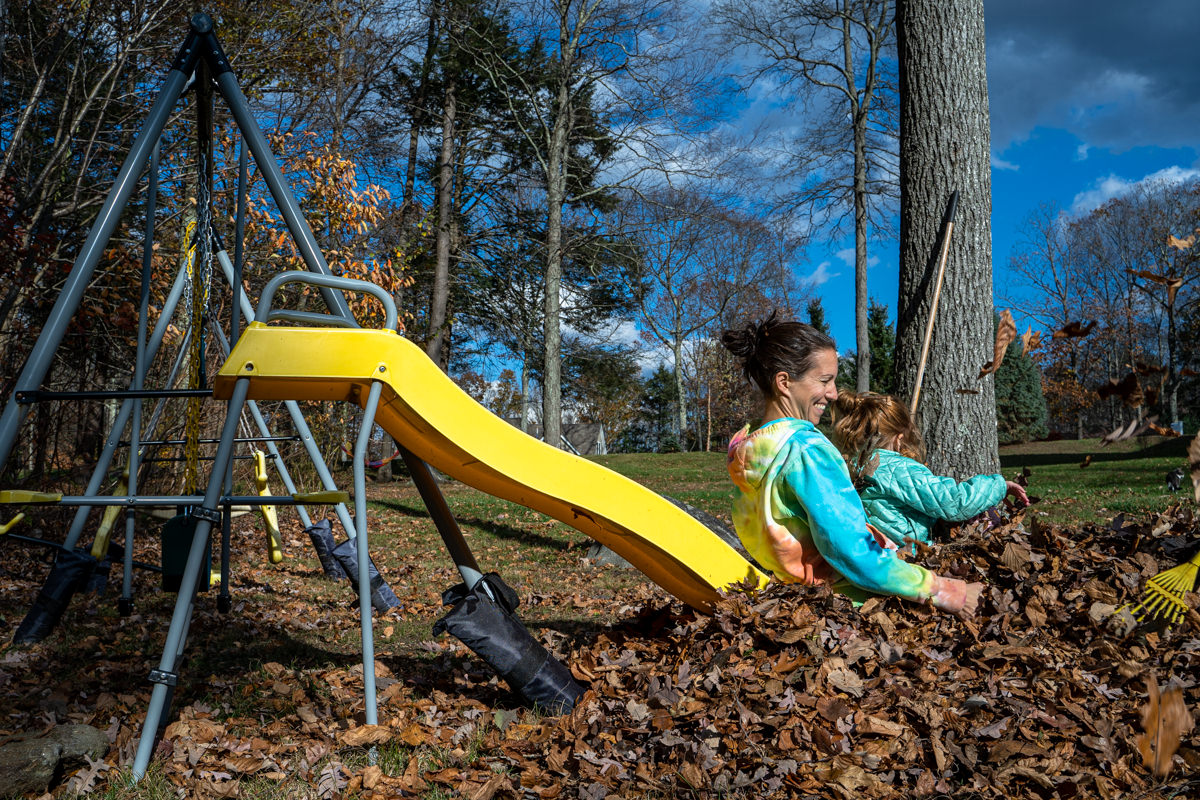 This week, Hartford, Connecticut-based documentary family photographer Anna Holden is sharing her tips and tricks for taking self portraits

Documentary self portraits – Because who can afford a family photojournalist every day?

Do I believe in love at first sight? No doubt.

Three years ago when I stumbled upon documentary family photography for the first time, I stared in wide-eyed wonder. I had fallen head over heels. I had to have it. Like, yesterday.

We’ve hired a photographer for a full DITL session each and every year since, but there’s so much that happens between our sessions. There are moments almost each and every day where I think to myself, “wish I could have a photo of this”. And sure, I could take them, but I want to be IN photos with my kids, IN the moment, not just the one always behind the camera. 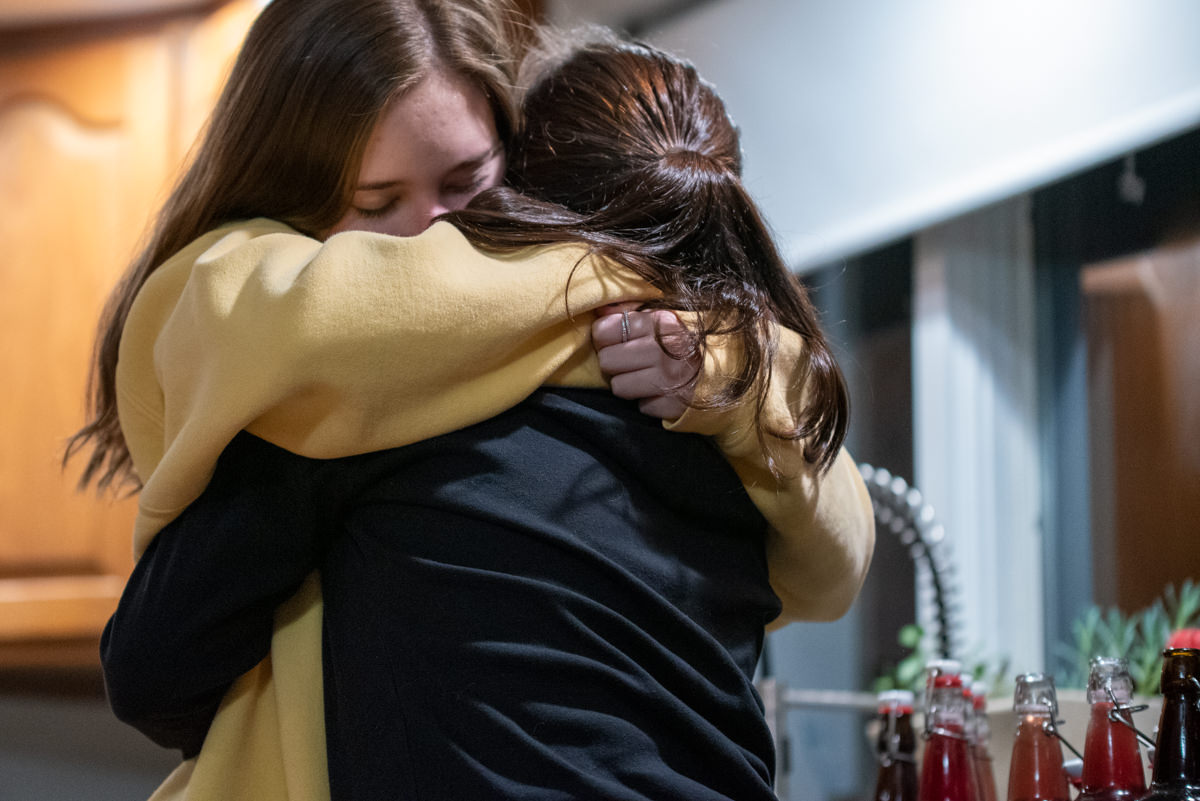 Ideally, my husband would take photos in the interim. But several years ago now, I gave up hope that he would ever [a] independently recognize a moment worthy of being photographed prior to being told of said moment and subsequently being too late and/or ruining it and [b] use his phone for anything outside of work and/or reading the news (i.e. as a camera, one of the nicest on the market, might I add).

I had to take matters into my own hands.

I didn’t want to be missing from our family photos. So I made it a point to learn how to make moment-driven self-portraits with my family. On my own.

My journey has been hard. It’s been inconsistent. But it’s been so, SO worth it. They may not be perfect, but I treasure each and every self-portrait I’ve made.

In case anyone is in the same position I was, I wanted to share some things that I’ve learned along the way.

Things I wish I’d known at the very  start. May they make your journey a bit easier!

Nailing focus is hard enough when I’m manning the camera. With self-portraits, it seemed nearly impossible. That is, until the fateful day that I used live focus to set up my shot because my camera was too high up for me to look directly in the viewfinder.

With live view and continuous AF on, the camera constantly refocuses (at least it does with both my Nikon and my Sony). Such a game changer! You just need to choose the location in the frame where you anticipate the action/moment to be. It’s still a bit of a crap shoot, but so much more successful than, say, focusing on a teddy bear and then trying to stay in the exact same spot throughout an authentic moment. 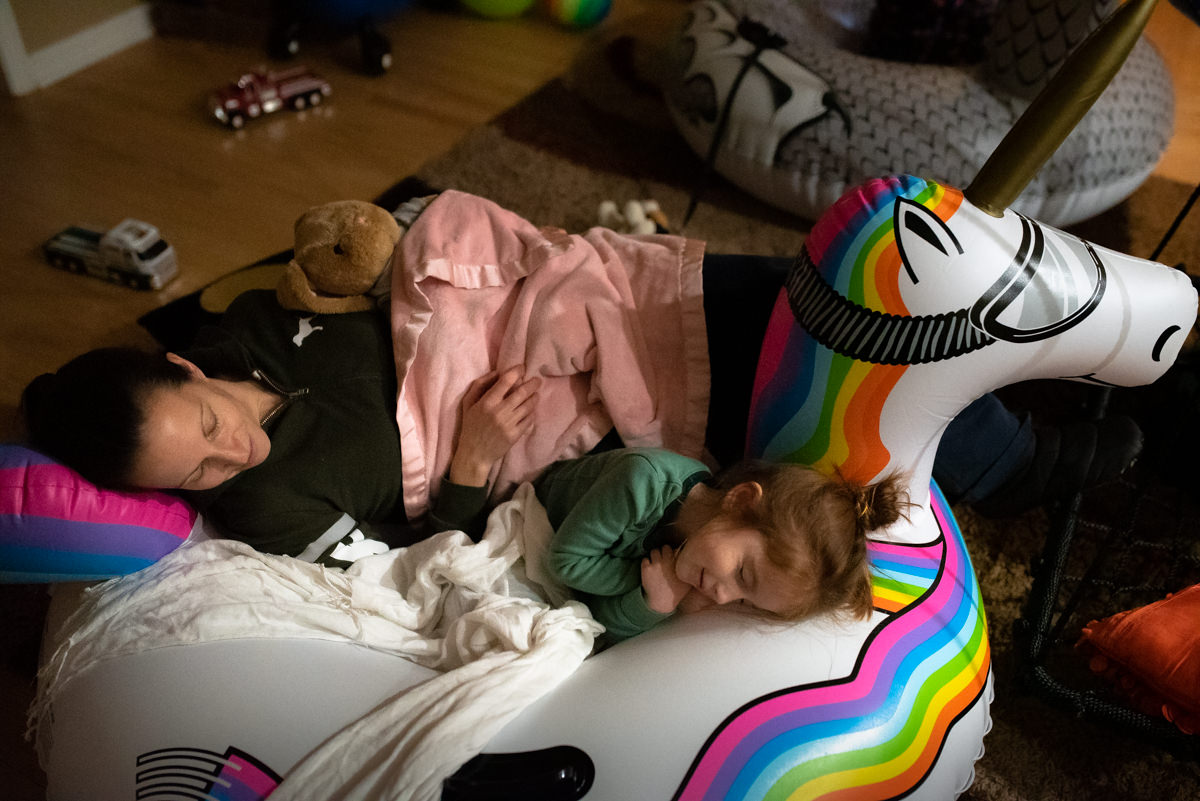 Yep. For me at least.

What really got me going on my  journey was when I finally looked up the cost of a remote.  It was under $10. I was ecstatic and ordered it right away. Unfortunately, I found it to be incredibly frustrating and hard to work with. 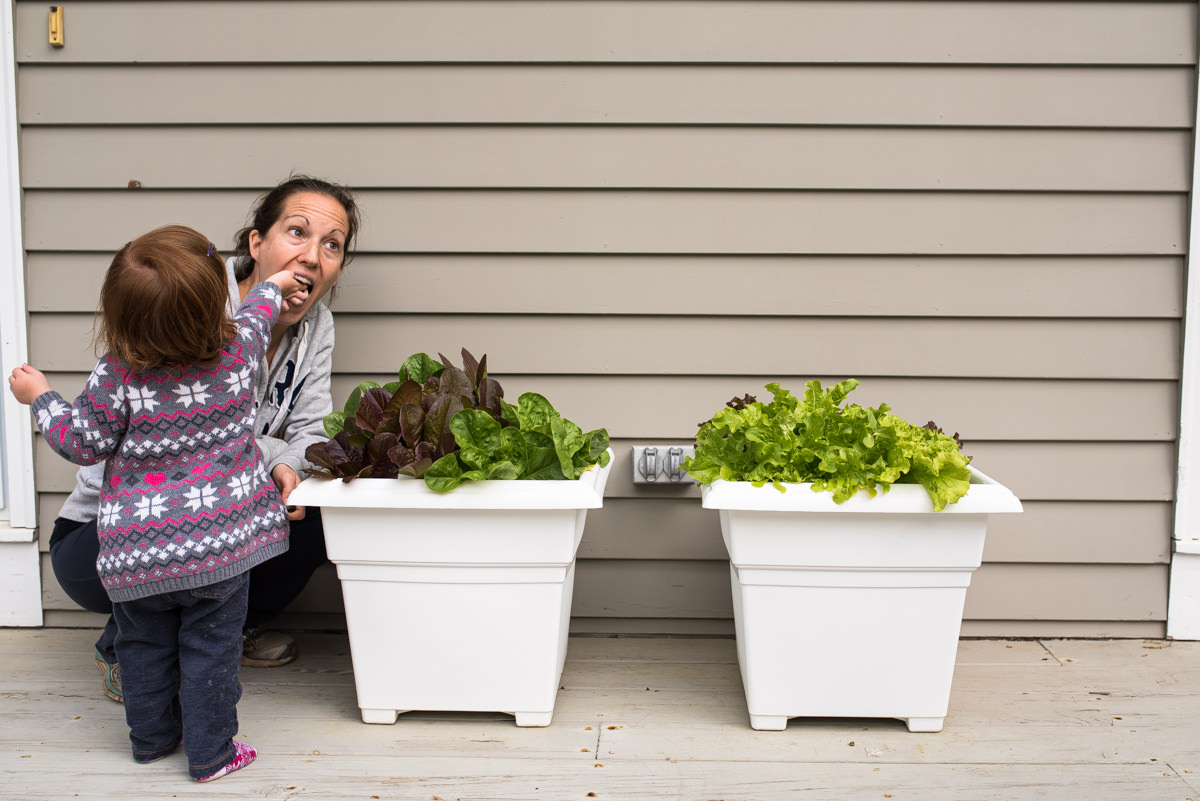 At first I tried having it set up so when I’d push the button, it would take the picture. Seemed the most logical and intuitive usage.  Sounded good in theory, but I found that the remote had to be directly pointing toward the camera with nothing in the way. Even then, it wouldn’t consistently release the shutter. This was especially annoying because you could always see the remote in my hand (as in the photo above). 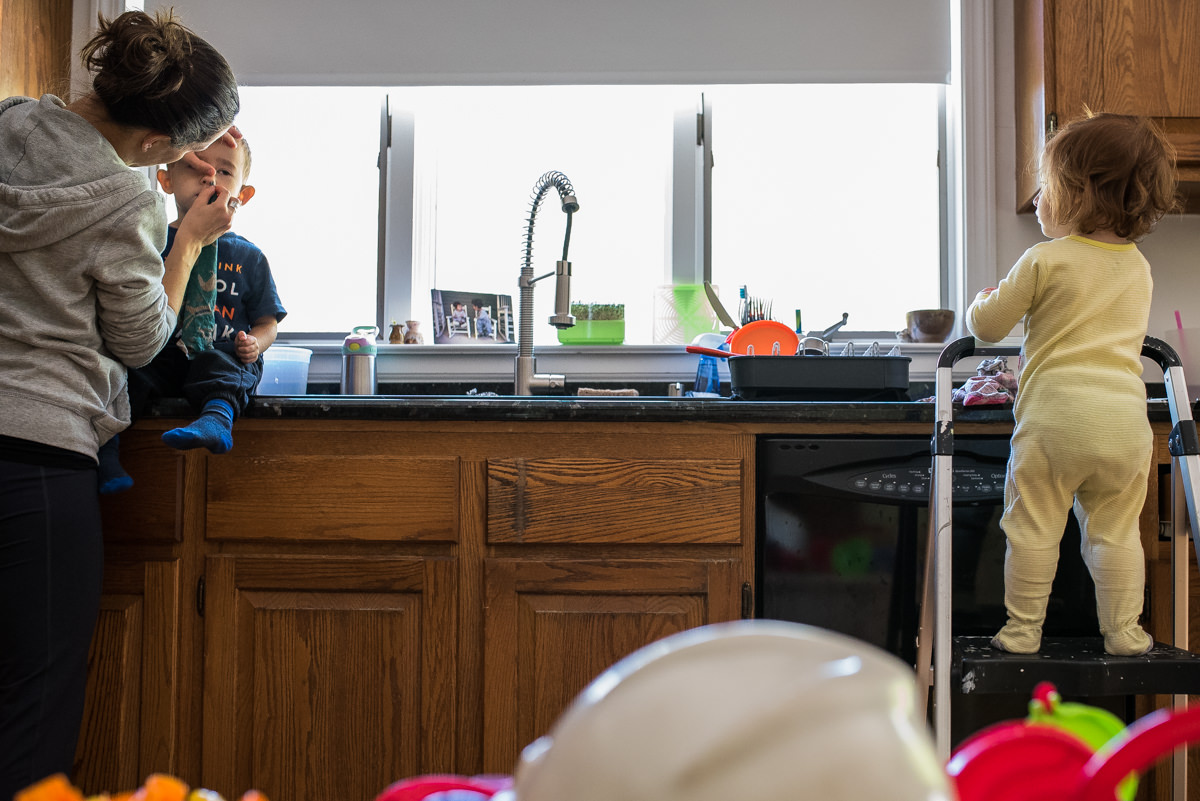 My workaround for this first issue I encountered was to set it up so that when I pushed the button, it would start the camera’s timer. So I’d point the remote right at the camera, then throw it in my pocket and go about my business for the next 10 seconds. This is what I did above. It worked, but it was cumbersome and didn’t allow me to really be present in the moment.

Though it’s personally not my favorite option, it works.  And maybe other brands work better or there are more expensive options that are more responsive and have more bells and whistles.  I’ve also heard that some cameras have apps where you can control your camera’s shutter with your phone. Sounds promising. But I moved on from the remote and have never looked back.

This was probably the biggest game changer for me. This functionality, built into most cameras, allows you to take a picture every x seconds for y amount of time. Usually used for time-lapse videos of plants growing or star trails, I found that I could set it up, forget about it and enjoy a moment without distraction. 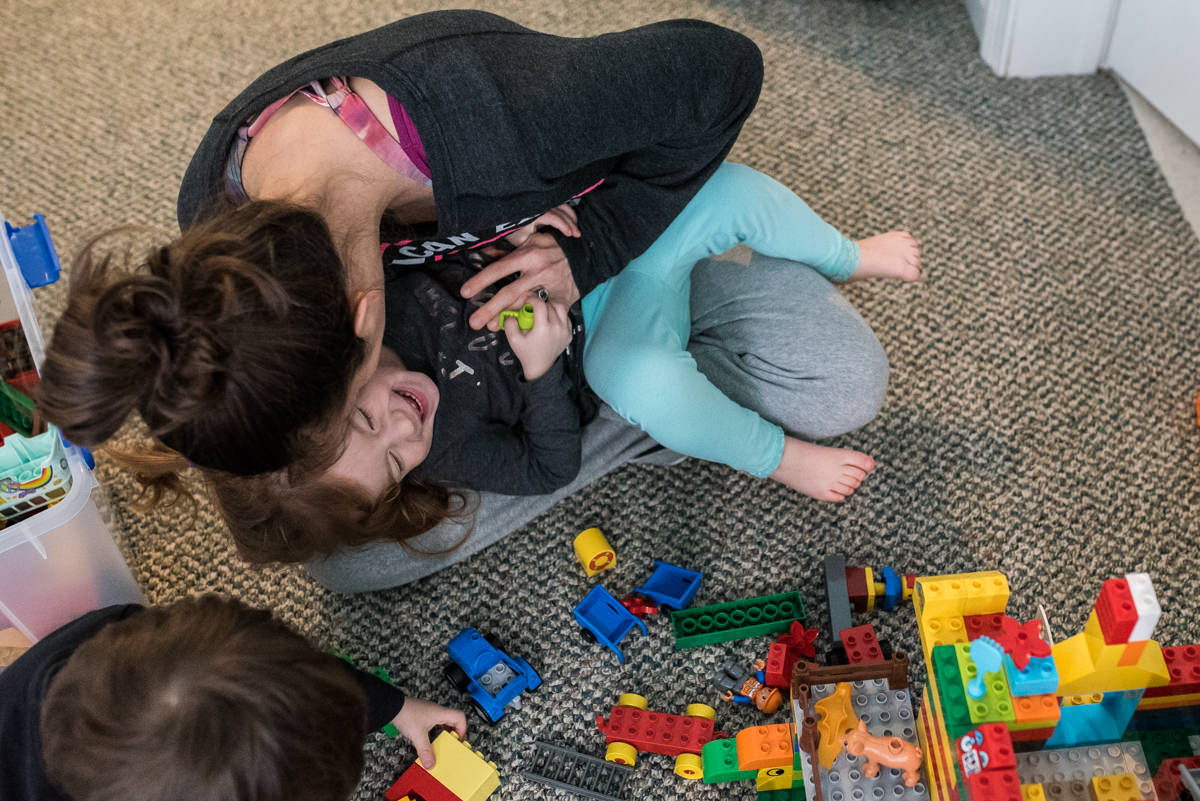 One day I went to take a photo of our latest and greatest LEGO creation and stopped myself, thinking I would much rather have a photo of us playing and building together. So the next day, I set up the camera to chug away in the background as we played. To be perfectly honest, this methodology produces a LOT of crap. BUT, I’ve always been able to find several gems amidst the junk. Best part is I can truly be present with my family. 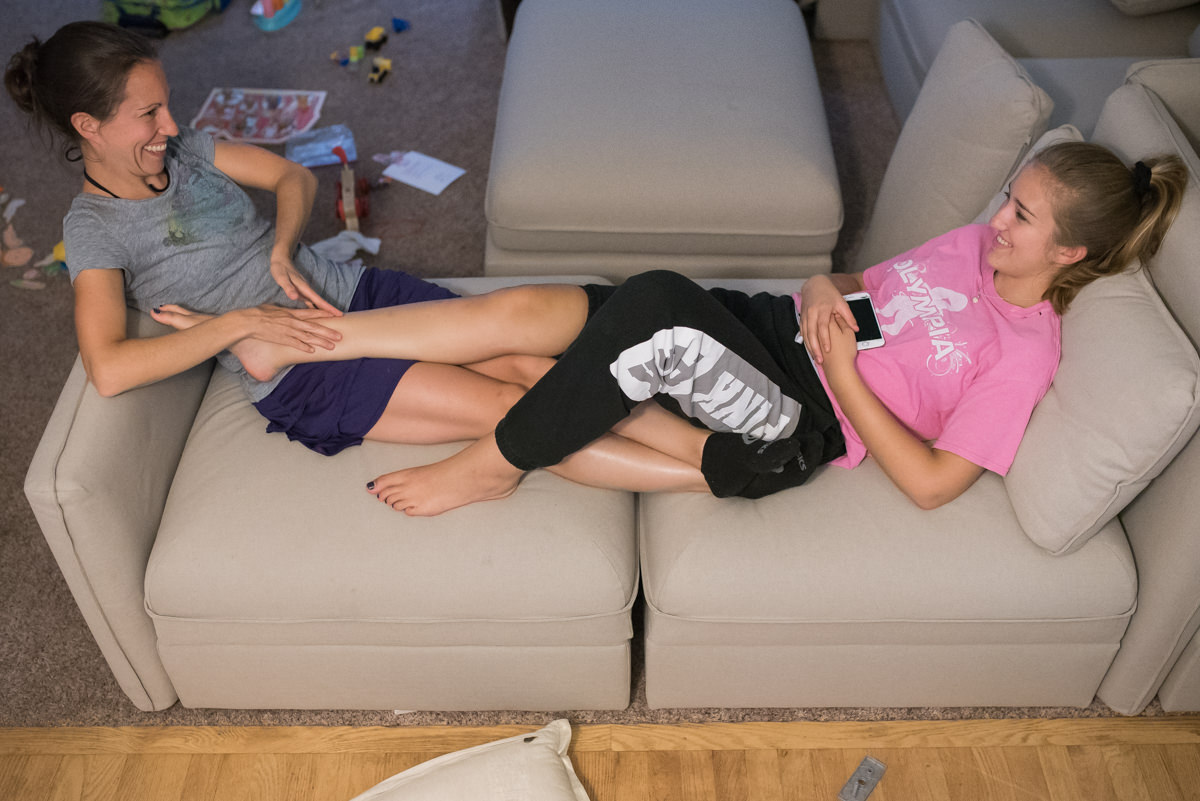 When using this method, I strongly suggest going through the photos as soon as possible; choose a few favorites and delete the rest. I average anywhere from a few to several hundred shots when using this approach. It would quickly become an insurmountable task and clog my computer if I didn’t sort through them right away.

It’s infuriating when someone moves from where you were anticipating and you’ve cut their head or arm off. I’ve learned to leave plenty of room for movement within a frame. I suggest framing it as you normally would, then taking a step or two back and setting up your camera. You can always crop in tighter when you’re editing. 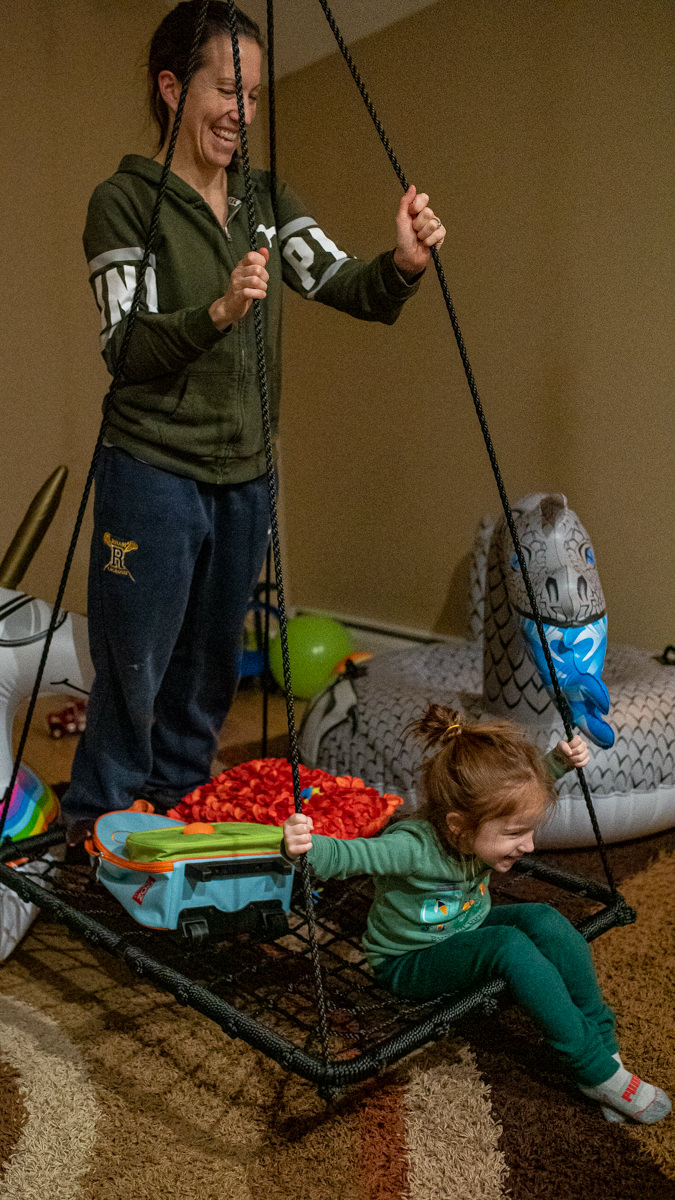 We have a swing in our formal living room. To make this photo, I set the camera up even farther back than I would for a typical self-portrait because of the range of motion. Leaving breathing room makes sure nothing important is cut out. While I normally try to get the composition right in-camera to minimize cropping, self-portraits are a whole other ballgame.

This was a really hard one for me. You can only do so much, esp. when the camera isn’t actually in your hands. Embrace whatever develops. Embrace imperfection. It’s way better than the photo your spouse didn’t take.

These are some recent self-portraits. As barbers are all closed with the quarantine in effect, I decided to give my son a much-needed haircut. First time I’d  ever used  clippers!  For some reason he dropped his towel and of course started to get covered in hair and super itchy. My husband went to grab the dust buster and I took the opportunity to grab my camera. 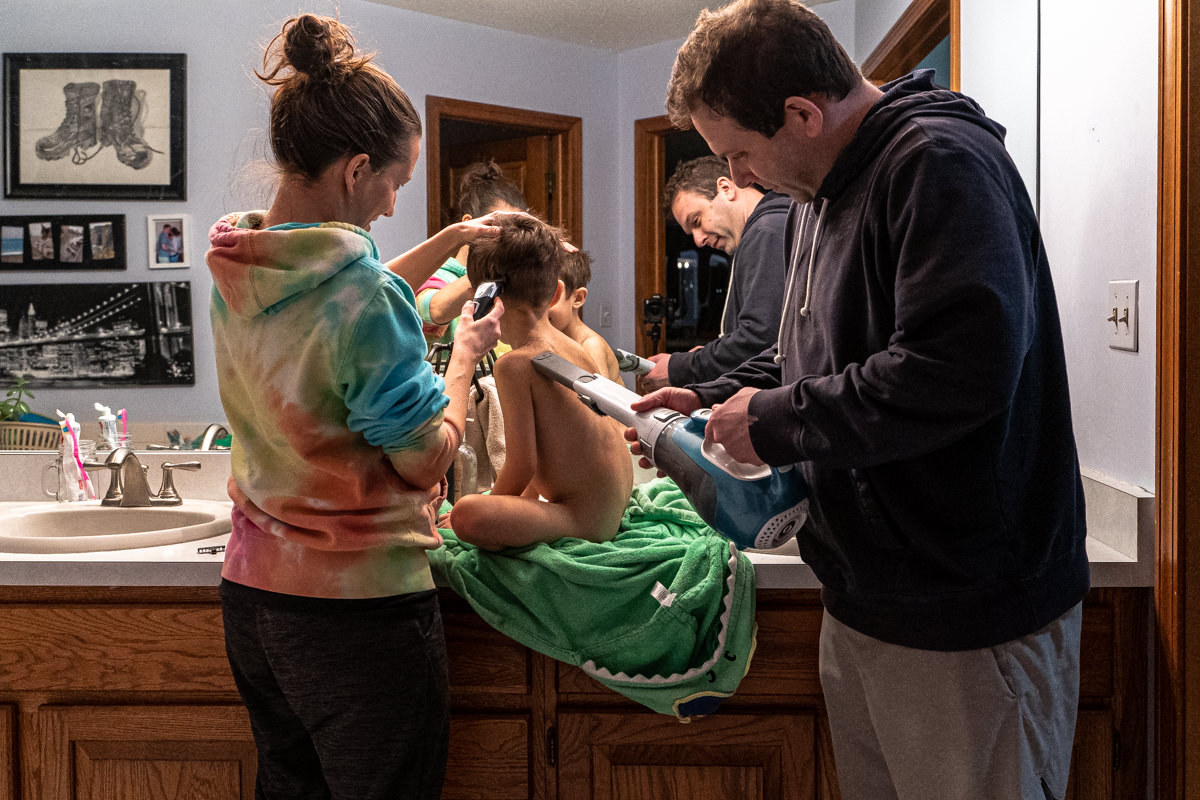 I’ve gotten really good at having everything within reach to set it up quickly and move on with what we are doing, but this was the quickest I’d ever done it. When I started going through the pictures later on, I realized the camera and tripod were in plain view. I was in such a rush I didn’t even think about the reflection! At first, I wanted to delete the whole series of photos, what a rookie mistake! 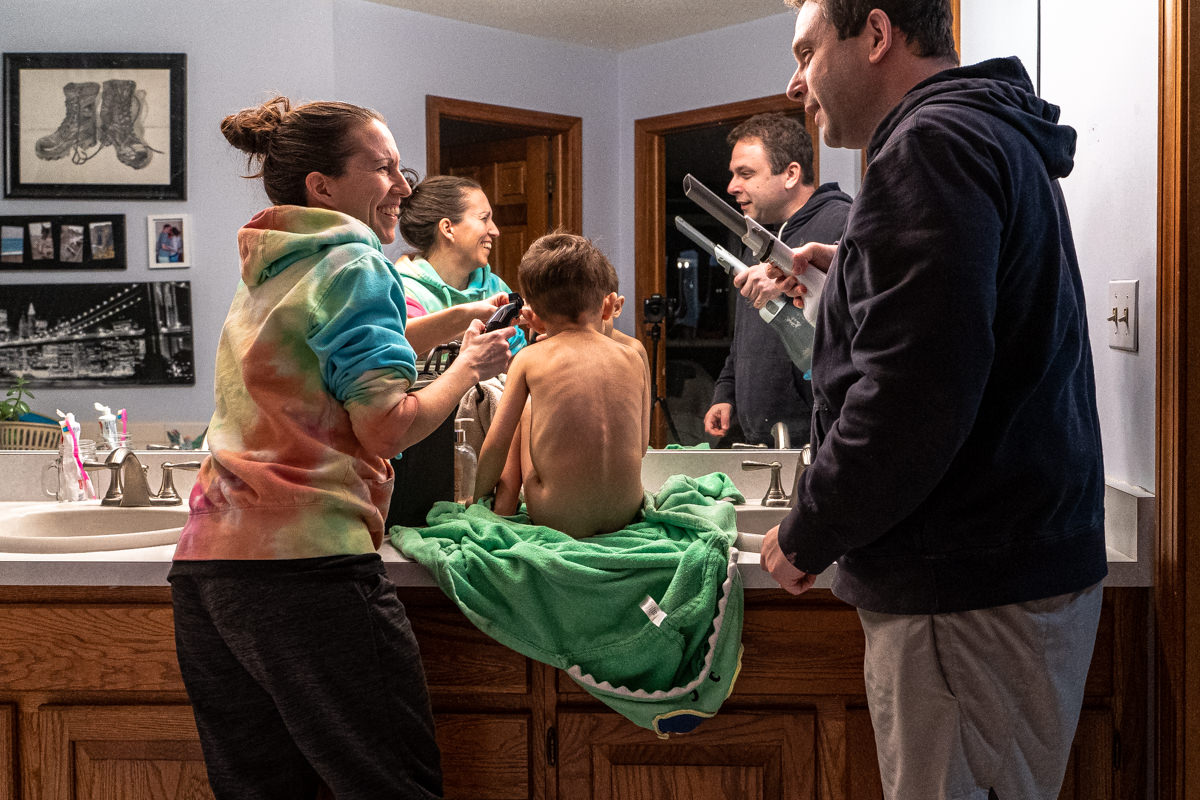 I’ve come to really love these photos. For one, they’re hysterical and I don’t often get my husband and I in action. Secondly, these are the only self-portraits I’ve taken to-date where it’s totally obvious that it’s a self-portrait. I’ve come to realize, that’s kind of cool!

If I waited until I showered and did my hair and put on real clothes and looked “presentable”, I wouldn’t have any photos. Seriously. In practically every self portrait I’ve taken, my hair is thrown up in a messy bun and I’m in jog pants and a hoodie. There are more important things. My kids, the gym, coffee (in my case, kombucha), time for friends, and sleep, to name a few. 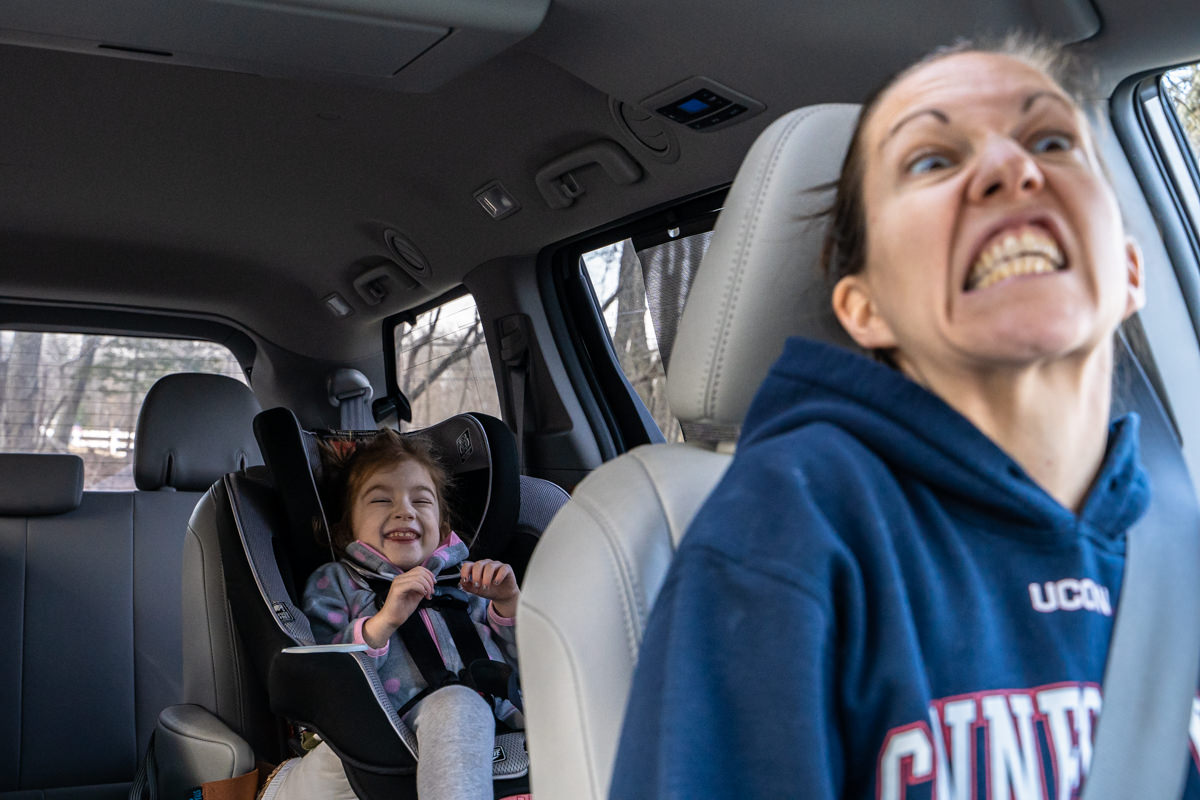 I made this photo in the drive thru of Dunkin Donuts. Thought I should have a photo of  our car antics because, until recently at least, we spent so much time in the damn thing. So I threw on some Laurie Berkner and we were goofing around on our weekly bagel run. I look bonafide crazy, but it makes me laugh. It obviously made my daughter laugh. This is who I am. This is how I roll. This  is ME. And my friends and family love me and will cherish these photos, even though it’s  kinda obvious I don’t shower enough. 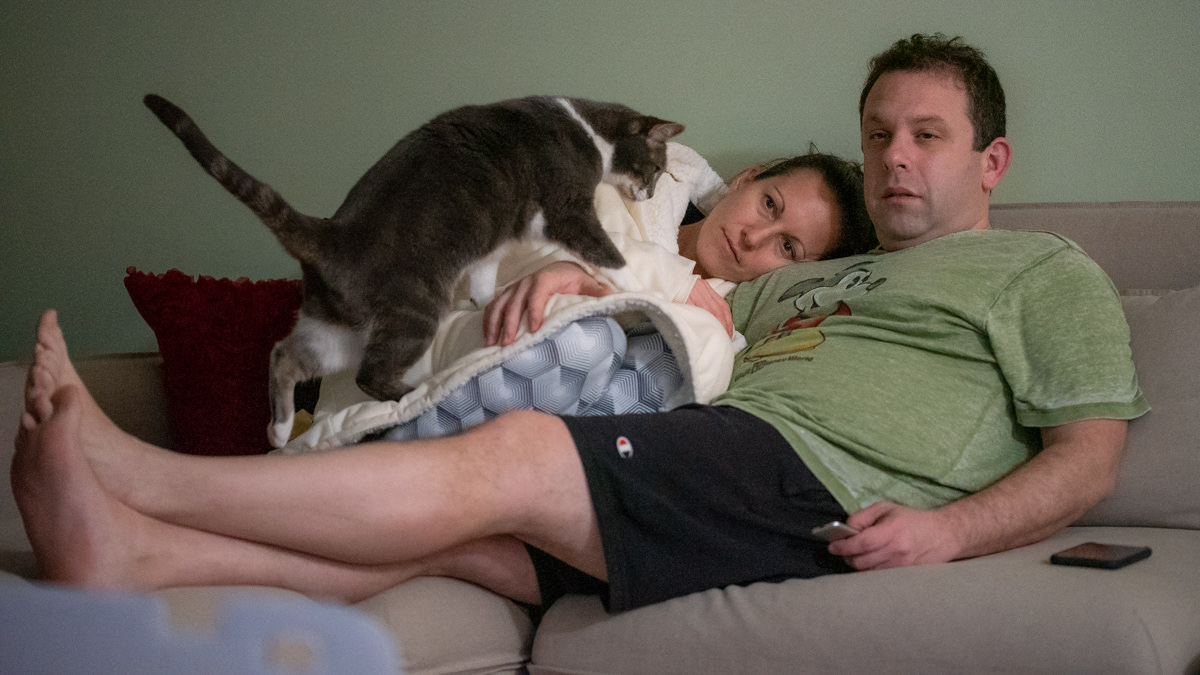 Why do I do this?

As my grandfather would  say,  “Ain’t nobody gettin’ younger”. I want these photos to serve as a reminder and visual proof of how much I love my family and how much fun we have together. I want my kids to have these to go along with their stories, for when their memories start to fade, to show their kids when they ask about their childhood, and for when they can’t remember a time when my husband and I weren’t all  wrinkly and grey.

These days are a gift, not a guarantee. 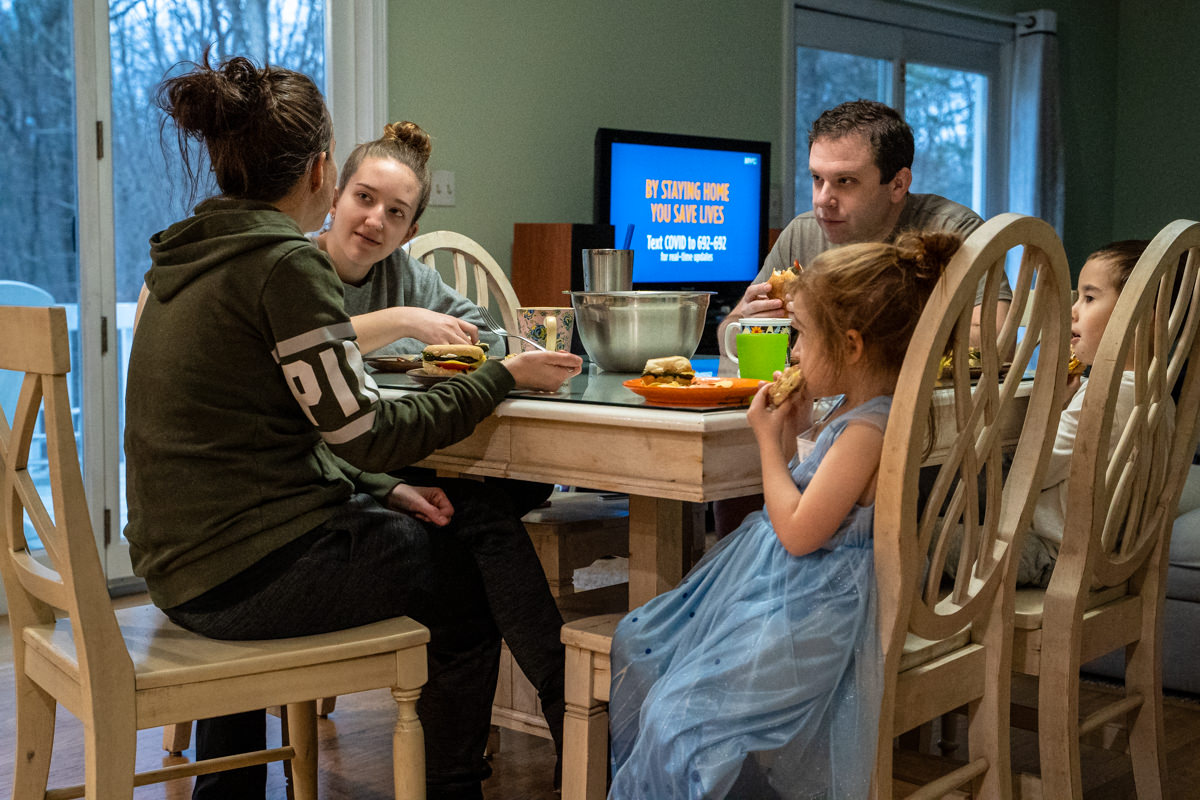 Please let me know if this has inspired or helped you in any way. And I would love for you to share your self portraits if you’re willing! Use the tag #dfp_selfportrait

For those interested, you can see more of my self-portraits with #myeverydayisworthit